Transcription factors (TFs) are generally bound to several (~ 10,000) discrete genomic sequences in the cells in which they are expressed. This binding repertoire does not greatly vary according to cell type. However, only a subset (~1,000) of these binding sites is “active” (i.e. conferring TF-dependent transcriptional response to the genes next to which they are located) in a manner that depends on cell type. Moreover, a given TF can regulate a coherent transcriptional program, also according to cell type, leading to the induction of a distinct pathophysiological trait. How are these differential transcriptional programs regulated, through which epigenetic mechanisms, with which interacting partners (transcriptional co-regulators) is currently unclear.

We address these general questions in the team using the ERRα TF as a model. ERRα regulates numerous features of energy metabolism in a manner that largely depends on the PGC1 co-activators. ERRα is strongly expressed in tumors with poor prognosis, where it promotes several traits of cancer progression (e.g. proliferation, resistance to hypoxia, angiogenesis, cell migration and invasion), in a PGC1-independent manner. Our current goals are: i- to identify the transcriptional modulators that (physically and functionally) interact with ERRα to induce transcriptional programs leading to the induction of cell migration and invasion (as hallmarks of aggressive cancers), ii- to identify the molecular consequences of these interactions at the genomic/transcriptomic level, iii- to determine the detailed cellular features that are modulated by ERRα upon these interactions.

To these ends, we use an array of techniques ranging from bio-informatics analysis, molecular biology (RNA-Seq, ChIP, ChIP-seq, analysis of histone marks, qPCR…), cellular biology (dynamic analysis of cell migration, actin network and focal adhesion…) to in vivo invasion assays. 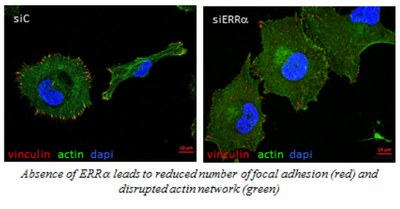