How do two tissues with a stereotypic program communicate during development to construct a functional system? 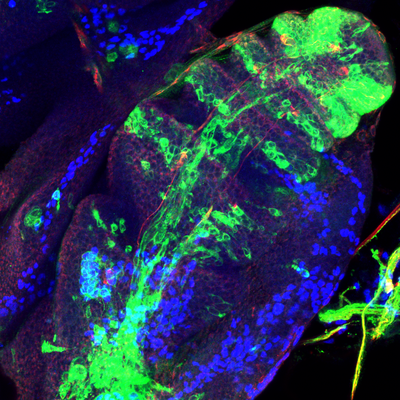 Motoneurons innervating fly leg or vertebrate limb muscles send axons out of the CNS during development to meet their muscle partner localized in the fly imaginal disc or the vertebrate limb. The wiring between an axon and its muscle partner is stereotyped between animals and under the control of transcriptional programs during development. The cellular mechanism and the effector genes of this transcriptional program, implicated in the stereotypic axon-muscle recognition in appendages, are unknown.

Advances in axon-muscle recognition have been made in the Drosophila larval neuromuscular system, where several secreted proteins or transmembrane proteins playing attractive and repulsive roles have been discovered, providing a conceptual basis of axon-muscle recognition. However, the locomotor system of the Drosophila larva has a singular architecture and development. Each larval body wall muscle is composed of a single fiber, innervated by axons after muscle differentiation. In contrast, mouse limb and Drosophila leg muscle are composed of several fibers, and muscle-axon recognition occurs early during development, before the formation of appendages. Data in Grasshopper leg even suggest that axons recognize muscles at the stage of muscle precursor cell (before the process of fusion). In Fly, the imaginal disc (immature leg) of wondering larvae is crossed by a single nerve). MN axons defasciculate from this nerve very early during leg metamorphosis, 20 hours before the process of fusion, suggesting that axons could recognize muscle precursor cells before the process of fusion. It is at this developmental stage that unique connections between developing muscle and immature MN will take place. How do two tissues with a stereotypic program communicate during development to construct a functional system?

For this objective we combine immunohistochemistry, genetic techniques with single cell profiling to discover the effector molecules controlling the unique recognition between an axon and a muscle fiber.